Alyson Bell is a practicing visual artist living and working in Sydney's Northern Beaches and working predominantly, though not exclusively, with the moving image, video and installation.

Her artworks have been described as poetic and layered and often centre around an emotional state or a connection to place. That said, they also have been known to surprise with a unique element of playfulness.

Alyson's background in Graphic Design (BA Hons degree, UK), in Film Directing (VCA Film & Television School post-graduate diploma) and Visual Arts (diploma) has hugely informed her arts practise. With a career encompassing work in London & Sydney as a photographic stylist, magazine art director, advertising art director, film director of commercials/promos/museum exhibition videos and her own award winning short films (both here and internationally plus an Australian Film Institute nomination)... have all naturally merged into what is now her current practise.

Alyson has exhibited in many group exhibitions and festivals since 2014 and won The 2015 Kennedy Prize with her video installation Never-Ending Tide.
​At Bundanon’s 2017 Siteworks Festival she projection-mapped the animation Spirit in the window of Arthur Boyd’s studio and in 2018 was selected for a year long Studio Artist Residency at the Northern Beaches Creative Space in Sydney.
For the 2019 Manly Arts Festival Alyson created Into The Pathless Woods - an immersive large-scale video projection and installation as part of a weekend drawing event at Eramboo Gallery. 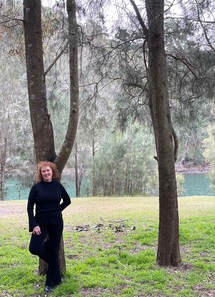